Andre's fabulous "Punkaphant" (above) was created for the Elephant Parade, an organization devoted to saving the endangered Asian elephant:

The Elephant Parade has had art events all over the world, including London, Singapore, Milan and Amsterdam. When Dana Point in Southern California was selected to be the site of the first parade in America, Andre was invited to decorate one of the thirty elephants. The Elephant Parade will be on exhibit from August 23th through November 17th.

Learn more about the parade in Dana Point and see more photos of the elephants here. See a slide show and read an article in the LA Times here. Find the official Elephant Parade Fan Page on Facebook here. And take a look at the happy reaction of a few of Andre's fans at the opening event this past weekend:


Posted by Cynthia Friedlob at 3:27 PM 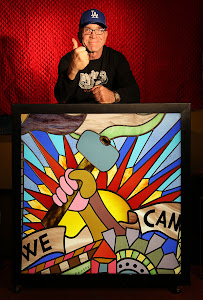